1. Geographical description
Scientists from Soils and Fertilizers Institute, Chinese Academy of Agricultural Sciences founded a rural research site at Qiyang County, Hunan Province in the Spring of 1960. Qiyang Research Station was founded in 1964, and renamed Red Soil Experimental Station, Chinese Academy of Agricultural Sciences in 1983. It has become an all-around agricultural research base from a simple rural research site after more than 40 years development. The Qiyang Research Station is the oldest agricultural research station in China. The site is located in south part of Hunan Province (111°52' E, 26°45' N) (Figure 18). The topography in the area is comprised of low hills with elevation between 100-300 m. The climate of Qiyang County is classified as mid-subtropical with four distinct seasons and a predominance of spring-summer rainfall (68% of the 1290 mm annual total). Yearly average temperature is 18˚C with the lowest temperature on record of -8.4 ˚C in January and the highest 40 ˚C in July. The frost period extends over 4 months with an average of 68 frosts per year ending by March. The mean annual sunshine duration is 1613 hours with mean annual solar radiation of 4370 MJ/m2.

2. Main farming systems and typical agricultural management activities in the study area
In this region, the general land utilization models are rice-rice-fallow, green manure or rape on paddy field; Peanut, sweet potato, lily, corn, watermelon and other crops in upland areas; oranges and other fruits trees, tea-oil tree, tea, shrubs and herbage on the gentle hillslopes; and Chinese fir tree and bamboo on steep hills. Since the Qiyang site was founded, it has engaged in developing and assembling new agricultural technical systems for increasing production, and conducting experiments and demonstration for sustaining agricultural development for agriculture, the countryside and farmers in the red soil region. It has made outstanding achievements in agricultural science technology advancement and the development of rural economy in the red soil region. The typical agricultural management activities always adopt chemical fertilizers and manure application. The intensification of agriculture resulted in accelerated rates of soil erosion and acidification. Furthermore, water pollution of the aquifers has become an important issue due to over- fertilization of the land and overuse of plant protecting chemical products. Organic farming and integrated land management practices have been established in some areas for the protection of soil quality and ecosystem functions. 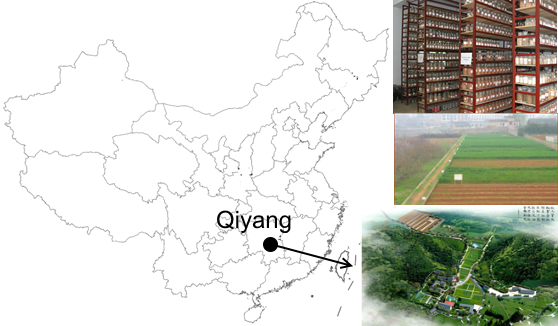 3. Characteristic soils and soil quality monitoring practice
Red soils primarily are located in the southern part of Yangzi River, especially in the lowland and hilly area. These include the majority of areas in the Jiangxi and Hunan provinces. The total area of red soil is 56.9 million hm2. The major soil types are developed from Quaternary red clay red earth, sandstone red earth, purple soil and limestone red earth. The dominant parent material is kaolinite. Soils of Qiyang are dominated by Ultisols. Ultisols are widely extended covering >50 million hm2. Soil is acidic and depleted in nutrients (nitrogen, phosphorus and potassium). Available calcium and magnesium is also low. Micronutrients such as boron and molybdenium are at very low concentrations. Soil texture is mainly characterized as clay. The soils contain high concentrations of iron and aluminium hydroxides.

The existing practices can be characterized as positive or negative in soil quality monitoring and are mainly applied in the area of Qiyang: (a) intensive cultivation of the land accompanied by application of fertilizers and pesticides (negative), and (b) animal manure application (positive). Intensive cultivation widely, distributed in the area, has primarily negative impacts leading to problems of soil acidification. To date, data on crop yield, surface soil organic C, N, P, K and pH has been collected. All historical soil samples have been well kept.