WP4 entails the development of an IT-based Soil Quality Assessment app (SQAPP), running on mobile and/or notepad devices to facilitate in-field data collection and monitoring. The app will be designed to be used preferably having internet connection; however, a simplified off-line version will also be released for users without internet access. In the first case, SQAPP links to a cloud server where an extensive database will, based on required site-specific information provided by the user, inform SQAPP user instantly about the state of soil quality, plus recommended measures for improvement. The tool will accommodate operation at different levels of complexity, starting off with a minimum data set of easily observable/measurable indicators which can be extended when more detailed data are available. Simultaneously, data submitted to the server can be used to monitor soil quality in time.

Activities in this WP include i) laying out the specifications of tool design and functionality at different levels of complexity (TRL2); ii) developing an alpha-release version of SQAPP (TRL4); iii) analysing first release performance and upgrading of the tool (TRL5); iv) rolling out a beta-release and a web-based data platform across Europe and China (TRL6); and v) release a final tool derived on basis of feedback from beta-version users and expert judgement (TRL8).

Deliverables are i) a pilot soil quality assessment tool (TRL4) and ii) a tested and validated final version of SQAPP (TRL8). 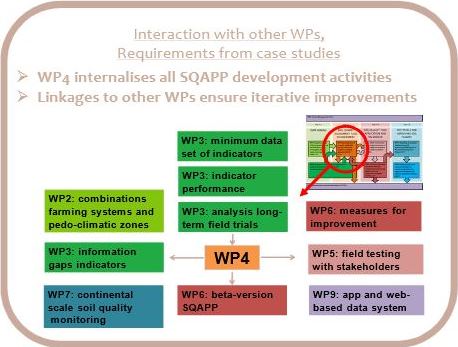